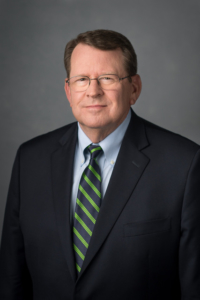 “We are extremely honored that Mark has aligned with Jennings Strouss to continue providing guidance and insight to the utility industry and Arizona civic and charitable organizations,” states John C. Norling, the firm’s Managing Attorney. “As a well-known and respected leader, he is an asset to our clients and the continued growth of the firm.”

Bonsall joined SRP, one of the nation’s largest publicly owned electric and water utilities, in 1977, where he held various positions, including Treasurer and Chief Financial Executive, before being named Chief Executive Officer and General Manager in 2011. After 41 years with SRP, he retired in May of 2018. Appreciating each other’s contributions to the national utility industry and Arizona business and charitable communities, Jennings Strouss and Bonsall recognized the mutual benefits of forming an association.

“Jennings Strouss is well-respected and has deep roots in Arizona,” states Bonsall. “As a native Phoenician, the firm’s history in helping shape the state is something I appreciate. I am pleased to be associated with such a great firm and look forward to representing Jennings Strouss through my continued involvement in the utility industry and community service.”

Throughout his career, Bonsall served in leadership roles for numerous utility and energy industry organizations, including board member and Chairman of the Western Systems Coordinating Council (now WECC), member of the Issuer Advisory Board of the Municipal Securities Rules Making Board, member of the Board of Trustees of the North American Electric Reliability Council (NERC), and board member of the Electric Power Research Institute. He was also invited by the Secretary of Energy to serve on the Task Force on Electric System Reliability.

Bonsall’s community involvement includes board positions on numerous Arizona charitable organizations, including the Phoenix Metro YMCA, Phoenix Children’s Hospital, and the Heard Museum. He also served on the board of directors of Greater Phoenix Leadership, the Greater Phoenix Chamber of Commerce, and the Arizona Commerce Authority. Currently, Bonsall serves on the Arizona Community Foundation board.

Bonsall attended Arizona State University, where he earned a baccalaureate degree in engineering. He also received a Master of Business Administration degree from the Wharton School of the University of Pennsylvania.